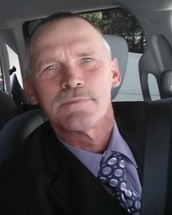 Larry was born September 27, 1960, in St. Louis a son to the late Larry Duke and Rebecca (Counts) Sinquefield who survives.

Larry was united in marriage to Teresa Stroup, she survives of the home.

Larry worked as a carpet and flooring installer for over 40 years.

He was a member of the Mt. Olive Baptist Church and enjoyed hunting, fishing, drag racing, watching NASCAR races, westerns and cooking shows.

In addition to his mother and spouse of 23 years, Larry is survived by three sons, two daughters, one brother and nine grandchildren.

In addition to his father, Larry was preceded in death by two brothers, Robert and Shane Duke and an infant daughter, Whitney.

Expressions of sympathy may be made to Mt. Olive Baptist Church.

To order memorial trees or send flowers to the family in memory of Larry Duke, please visit our flower store.
Send a Sympathy Card