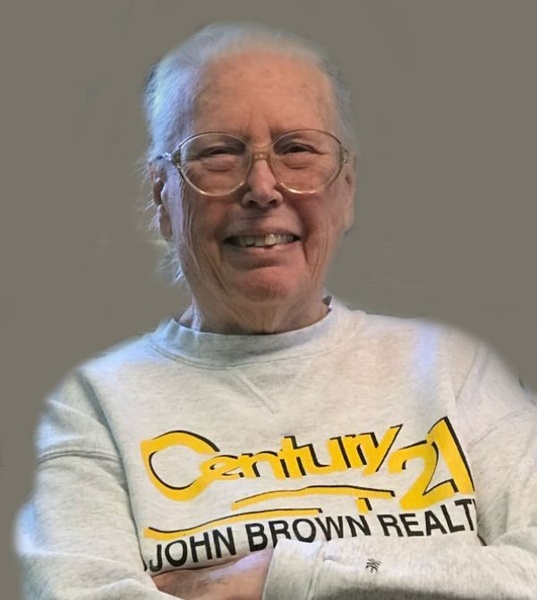 Bessie Ponzer, known as “Bess” to her friends, was born January 30, 1933 in Steelville, Missouri to the late John and Ressie Marie (Skaggs) Farney.

She attended school in several towns and one room schoolhouses until her family settled down in the Rolla area.

She married John Paul Ponzer and graduated from Rolla High School in May of 1951.  John and his brother, George, build a large rock house on Highway O.  The house was ready in time for the newlyweds to move into after their wedding.  This became the family home.

Bess was a loving mother who raised 7 children into adulthood, including a son, Timothy Joseph, who died at the age of 18 in 1987 from cancer.  Another son, John Paul Jr., died shortly after birth in 1964.

Bess was a wonderful mother and wife.  As a farmer’s wife she helped with duties on the farm in addition to running the home.  There is no telling how many miles of hay she raked or rows of vegetables she planted, hoed and picked.  She was especially proud of her asparagus patch from which she picked many pounds of asparagus, some of which was sold at the family booth at the Farmer’s market.  In the early spring, she joyfully looked through seed catalogs to determine which varieties of vegetable seeds she would purchase and grow in cut off milk jugs before transplanting them into the garden.  A favorite was Pink Gourmet Tomatoes.  Some of the extra seedlings were offered for sale in the booth where they would later sell the produce from the plants in the garden.  Tomatoes, corn, different types of squash, beans and potatoes were typical offerings from their booth, but other items were for sale as well.  Many a happy buyer took home homemade sweet rolls during the summer and plates of cookies and candy from the market in the winter.

Bess was quite a crafter and sold a variety of crafts at the market.  These included donkeys and elephants fashioned out of rope and sets of wisemen that were made from brocade and velvet as well as Christmas ornaments of many kinds.  She also fashioned jewelry from findings she ordered.

In addition to the farm and vegetable gardens, the family had a grape orchard.  Hundreds of bushels of grapes were picked from the field and sold out of the basement of the family home on Highway O.  Fields of pumpkins were also harvested – many sold to Callen’s Store where they were offered for sale to anyone who cared to buy them.  At times, there was also livestock on the farm and frequently there were chickens.

In addition, Bessie helped with the books for Ponzer Nursery, owned and operated by John and his brother, Ben.

Bessie was from an age of canning, square dances held in basements and quilting bees held in homes.  Hundreds of quarts of vegetables, jellies and chicken were canned in the rock house kitchen to be used to feed the family through the winter.  The basement of the old rock house on 72 saw it’s share of dances in their early married life, but these lessened as the family grew.   Quilting was a hobby that she greatly enjoyed, and which occupied much of her time in the later years of her life.

She quilted with the St. Patrick Church Quilting Ladies for many years.  She was also active in the Knights of Columbus Ladies Auxiliary and the Rolla Lioness Organization at different times in her life.  She volunteered at St. Patrick School as a room mother when her children were young and in later years, served the church as a volunteer counting the collection.

As her children grew older, she became a real estate agent.  She loved showing homes to families and helping them find just the right one.  Many of her clients became friends.  Bess loved reading westerns and delighted in poetry.  She had many poems committed to memory and would recite them when something reminded her of one.

She is survived by her children: Sharon Ponzer (How Patton), Donald Ponzer, Linda Novak, Robert (Penny) Ponzer, Debi Willy, and Bruce (Millie) Ponzer, Grandchildren: Desirae Ponzer, Phillip Ponzer, Aurelia VonTress, Mandy Ponzer, Shayne Ponzer, Allen Sager: Great grandchildren: Jaxton Dean Ponzer, Kendrick Karter Ponzer and Aurora Finley Ponzer.   Bess is also survived by many who were not related to her but became part of her extended family, notably Dick and Janet DuBroff who were initially real estate clients.  There are others – you know who you are.  There are many who will miss this smart, witty, wonderful woman.

Services for Bess will take place on April 7, 2022, at St. Patrick Church beginning with a visitation at 10:00 AM in the gathering area.

The Funeral Mass will take place in the church at 11:00 AM.

Memorial donations may be made to St. Patrick Quilters.

To order memorial trees or send flowers to the family in memory of Bessie Ponzer, please visit our flower store.
Send a Sympathy Card