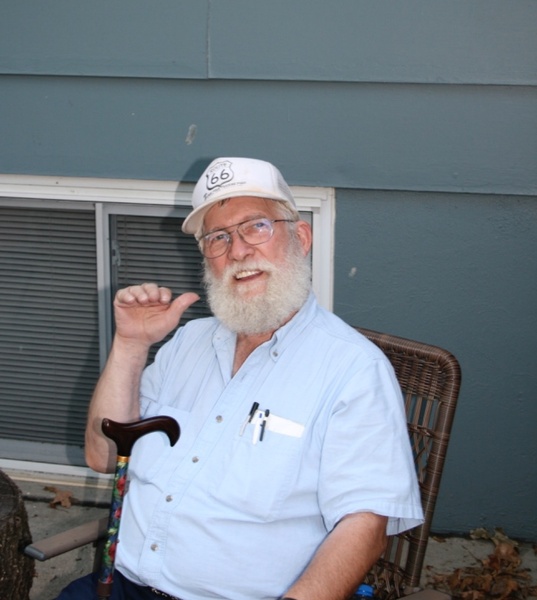 He grew up just a short distance away on what became the family farm.  He started grade school at the Corinth School House on what is now known as Route HH in Rolla.  He transferred to St. Patrick School, graduating there from the 8th grade.  Pete spent his high school years at Rolla High School, graduating in 1954.  Education was always very important to Pete. For ten years, he worked full time while also enrolled in college classes to earn a Bachelor of Science Degree in Civil Engineering from UMR (now known as Missouri University of Science and Technology).

In addition to working on the farm, Pete also worked at various jobs in his youth, everything from being a gas station attendant to working for a cab service.  He worked as a dispatcher for the cab service but occasionally drove the cab if needed.  One memorable event from his time with the cab service was delivering a baby in the back of the cab because they could not get to the hospital in time.  Trips for our family to St. Louis were rare but were always accompanied by memories Pete had of working with his father to help lay and pave I-44.

Pete had a business raising pigs but left that behind when he was drafted into the Army and became a Green Beret.  He was in the airborne division, which meant he was a paratrooper.  His first jumps did not go well, and he came in on his reserve 3 times before they realized he did not weigh enough to open the chute.  Things went better when he started jumping with a lead belt, but those early jumps as well as jumping with the lead belt, effected his health for the remainder of his life.   He worked as a surveyor when he returned from the service, first at a local firm, and later as part of his employment at Ft. Leonard Wood as a civil servant, the job he held while attending classes and earning his BS.  After receiving his BS, he continued working at Ft. Leonard Wood.  After retirement from the Fort, he taught computer science at St. Patrick School.

Pete would tell you that his favorite job and what he loved most in life was being a father.  Pete had one child, a daughter, Kaitlyn Willy, now known as Aurelia or Ari.  He was very proud of her.

As a Green Beret, Pete spent time in Okinawa where he learned to play a game called “Go,” which means five in Okinawan.  Imagine a large wooden board marked out in squares.  During their turn at play, each player places one marker on the board and works to create a row of five markers in their color, while also preventing the other players from doing so.  Kind of like Tic-Tac-Toe on steroids.  Markers were made from similar colored stones.  He learned the game from the “old men” on the street.  For Christmas one year, he received a game called “Pente” which we discovered is the same game with a smaller board.  Our family spent many nights playing Go or Pente, even in the nursing home in the months leading up to his death.  Another favorite game was “Kings in the Corner” which we also played at the nursing home.  He was an avid reader until his eyesight deteriorated to the point that he could not see well enough to read.   When he was no longer able to read, Ari and his wife, Debi, read to him, which he enjoyed.  One of the last books that he was able to experience and enjoy was The Winter Elf, written by Grace Anne McCluskey, a family friend.

He loved cowboy movies and romantic comedies, as well as Bones and other detective type shows.  Professional sports didn’t matter much to him, but he enjoyed baseball as a child and loved to watch school leagues.  He was a country music fan and loved Garth Brooks, Don Williams and everything in between but was also an Elvis fan.  In his younger days, he played the harmonica and the accordion, both of which he enjoyed.

George was a spiritual man, who prayed fervently and often.  Favorite prayers were the Chaplet of Divine Mercy and the Rosary, both of which he prayed almost daily.  He will be missed by those who knew and loved him but especially by his daughter, Ari, and Debi, his wife of 37 years.

Services for Pete will take place on April 9, 2022, at St. Patrick Church beginning with a visitation at 10:00 AM in the gathering area. The Funeral Mass will take place in the church at 11:00 AM. A graveside service will follow at Ozark Hills Memorial Garden Cemetery .Memorial donations may be made to the Newman Center Woodcut Ministry.

To order memorial trees or send flowers to the family in memory of George "Pete" Glen Willy, please visit our flower store.
Send a Sympathy Card