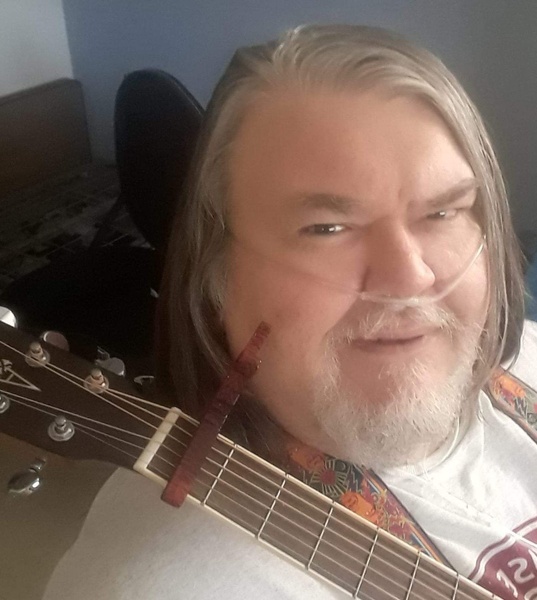 John was born August 22, 1965, in Joplin, to Howard James Ford and Delores Easter (Roberts) Ford. He was the youngest of six children. John was always proud of his roots and of his upbringing.
He graduated from Parkwood High School in Joplin in 1983, where he was actively involved in band. He earned a bachelor’s degree in mass communications from Missouri Southern State University in 1991, where he was on staff of the campus newspaper The Chart.

He was a reporter for the Miami (Okla.) News-Record, the Marshall (Mo) Democrat, and the Northwest Arkansas Times, before entering the newsroom of the Neosho Daily News in January 1995, where he would spend the next 20 years. John later became associate editor and, finally, managing editor before he left the paper in May 2015. He then worked, again, at the Miami News-Record, as a page designer, until September 2016.

John was an old school newsman who loved working a beat. He particularly enjoyed covering crime stories. He was a talented writer. His articles were articulate, fair, and accurate. He also wrote from the heart and had a way of connecting with the reader.

For many years John wrote a column titled Whirled Peas that was both humorous and insightful and was very well received.

He was a role model for younger reporters and was always very encouraging and complimentary.
To know John was to love John. He was the kindest, most compassionate, most generous soul God ever put on Earth. He was a friend to all and loved by all. He had big shoulders, both figuratively and literally, for anyone to lean on - or cry on - at any time. He was the most loyal friend anyone could ever hope for.

John loved to laugh and we will always remember the sound of his laughter filling the room. He had a great sense of humor and was very witty and quick on the draw.

John also loved music, especially classic rock ‘n’ roll. Late nights in the newsroom wouldn’t have been the same without jams blaring from the speakers of John’s computer. John was a voracious reader, especially of true crime stories, and was very interested in desperadoes of the Great Depression era.
He loved animals, especially cats, and was a big softy for taking in strays.

Most of all John loved his family. He deeply cared for all of his siblings, and he thought of his many nieces and nephews as his own children.
He had two great romances - Phyllis Perry, whom he lost in 2015, and Pam Griffin, who in 2017 filled the hole in his heart.

John made a positive impact on the lives of so many people. The world is a better place for John Ford having been in it. Since he left us, it will never be the same.

John was preceded in death by his parents; brothers Bob Ford and Ron Ford; sisters Betty Ford and Dorothy Andrews; and by his companion Phyllis Perry.

John is survived by his wife Pam; daughter Ashley; brother Jim Ford, of Northwest Arkansas, and many nieces, nephews, grand-nieces and grand-nephews, and a whole lot of friends who loved him - and will miss him - dearly.

To order memorial trees or send flowers to the family in memory of John Lee Ford, please visit our flower store.
Send a Sympathy Card