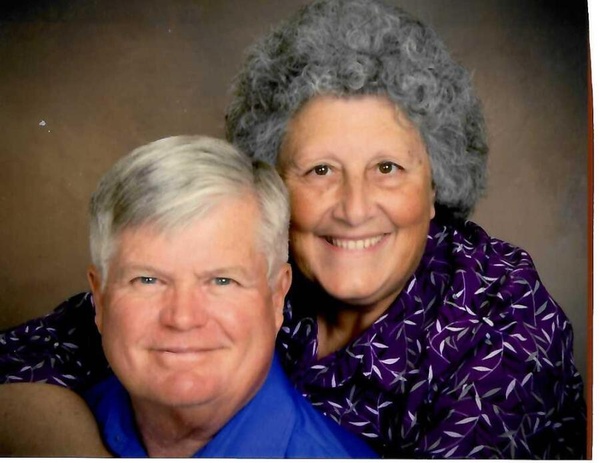 Vita was born February 16, 1955 in Beloit, WI, daughter of Michael and Angela (Passalaqua) Andreola. Vita graduated from Beloit Catholic High School, Beloit, WI and later received her associate degree from UW Rock County.  Vita was a homemaker and a teachers aid at St. Patrick's School where she retired in 2018.

Larry was born November 7, 1947 in Rockford, IL son of Donald and Mary Lou (Bubser) French. Larry graduated from Boylan High School, Rockford, IL.  Proudly served his country in the United States Navy during the Vietnam conflict.  Later received his BS degree in Political Science and Psychology from NIU.  Larry retired from Doe Run in 2011 where he was Human Resources Manager.

Vita and Larry were united in marriage on October 16, 1976, at Our Lady of the Assumption Catholic Church in Beloit, WI.

Vita and Larry were members of St. Patrick's Catholic Church, Rolla, MO, where Larry was also a member of the Knights of Columbus Council #2627.

Vita enjoyed shopping and her many trips to St. Louis to visit friends.  Larry enjoyed golfing and his fishing trips to Wisconsin.  Vita and Larry were loving parents to Megan.

The couple were loving and caring to all who knew them.  Together they enjoyed their trips to San Diego and their timeshare in Tennessee.

In addition to her parents Vita was predeceased by daughter Megan and brother Daniel Andreola.

In addition to his parents, Larry was predeceased by daughter Megan.

Visitation will be held from 9:00am until 11:00am on Saturday, June 26, 2021 at St. Patrick Catholic Church in Rolla, MO.  Mass of Christian Burial will follow at 11:00am with Father Greg Mystrick as the Celebrant.  Interment in Rolla City Cemetery, where they will be laid to rest next to their daughter Megan.

Special thanks to Rob and Michelle Rodgers and the city of Rolla for all their help at this time.  In lieu of flowers expressions of sympathy may be made to the charity of donor's choice.

To order memorial trees or send flowers to the family in memory of Lawrence "Larry" & Vita French, please visit our flower store.