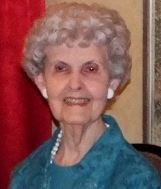 On September 5, 1948, she was married to Walter Lee Earls at Trinity Episcopal Church in St. James, Missouri.  They were both graduates of John F. Hodge High School, class of 1945. She graduated from Miss Hickey’s Secretarial School in St. Louis and worked at the Rolla Vocational-Technical School for many years.

Walter and Marian are the parents of a daughter, Nancy Krost of Rolla and a son, Michael (Barti) Earls of Ballwin, Missouri. They have two grandchildren, Trevor Krost of Chicago, Illinois, and Stacy Krost of Guangzhou, China.

She was a member of Christ Episcopal Church and ECW and was the organist for many years. She was an active member of the P.E.O. sisterhood.

In addition to her children and grandchildren, she is survived by one nephew, Kevin Cowan (Pam) of Overland Park, Kansas, and many more friends and family.  She was preceded in death by Walter, her husband of 70 years, two brothers and one sister.

To order memorial trees or send flowers to the family in memory of Marian Earls, please visit our flower store.