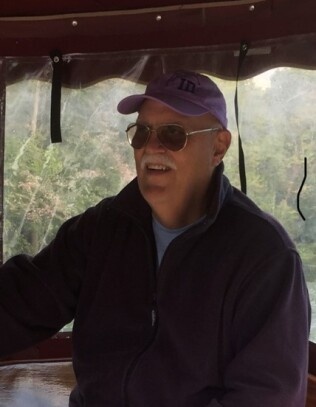 Mike Estey of Rolla, Missouri died peacefully on Wednesday, March 3rd, 2021 at the age of 70 with his family by his side after a yearlong battle with cancer.  He was born on September 24th, 1950 in Sac City Iowa, son of James and Clarice (Vanderpool) Estey.

Mike loved the lake and the ocean. One of the first things he did after graduating from Rolla High School was to teach Scuba lessons at a summer camp in the Bahamas. Later, he attended Diver’s Training Academy in Miami Florida where he was certified as a Deep Sea Diver.  After working as a diver in Tarpon Springs and in California, he joined a group of divers who traveled to Honduras to do shipwreck and treasure diving. He returned to Rolla in 1972 to work with his father at Estey Jewelry. Soon after arriving, he met the love of his life, Deborah (Staggs), and they were married June 9, 1973.  While working for Estey Jewelry, he became a Certified Gemologist and worked as a jeweler for 17 years.  After closing the store, he spent the next 29 years as Operations Manager of Missouri Southern Seed Company until his retirement in 2017.

Mike was a loving, thoughtful husband and father and loved nothing more than being home with his family and being around the lake and the ocean.  Mike and Debbie were blessed to be able to do a lot of travelling during their 47 years of marriage. Mike enjoyed hunting, playing golf, reading and spending time with his family and friends at the lake or beach. In addition to his wife Debbie, he is survived by his son, Brian of St. Louis, Missouri, his daughter, Heather Addington and husband, Matt, grandchildren, Abigail and Ethan of Riverview Florida, a brother, Eric of St. Louis and his mother, Clarice Estey of Rolla.   He was predeceased by his father, James Estey.

Mike was a member of Christ Episcopal Church, served on the Vestry and volunteered with the Open Door Ministry, the Back Pack program and GRACE.

To order memorial trees or send flowers to the family in memory of Michael "Mike" Edward Estey, please visit our flower store.
Send a Sympathy Card